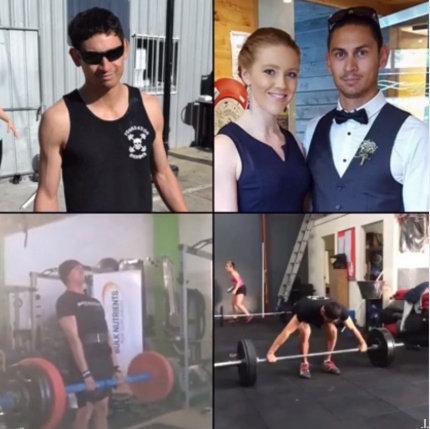 Today we are doing a WOD to celebrate the life of Ricky Maui.

Ricky was born in Hobart on 24.05.1991 and grew up in the northern suburbs. Ricky was an accomplished gymnast. His achievements included state champion at levels 4, 5, 7 & 8 and represented Tasmania at level 7 & 8 in the Australian Championships where he won bronze, silver & gold on the parallel bars  over 3 consecutive years and was selected to represent Australia at level 7. Ricky was a high achiever in all aspects of his life. He was awarded apprentice of the year in his 3rd and 4th years of his carpentry trade. After his 16 years of gymnastics Ricky joined Crossfit Resonate in April 2013 after the constant nagging of his older sister Danielle and fell in love with the training instantly. Ricky’s gymnastics skills made him an excellent crossfitter from day 1 but he still worked hard to master every skill thrown at him. He was a quite achiever but when it came to fellow crossfitters achievements he was always very supportive & encouraging. Ricky took on the role of gymnastics coach at Resonate passing on his wealth of knowledge to his fellow crossfitters. Ricky first caught the eye of his partner Jacki at the box doing a backsault into a ring muscle up. Not long after at a crossfit party Danielle played cupid and got Ricky & Jacki dancing and it was love ever since. Ricky was the king of muscle ups, double unders, pull ups, T2B, handstand push ups & full snatch hence todays wod. Ricky would have smashed us at this workout but as soon as he was done he would have been straight by our side to cheer us on.

No break in between.