Russ leaves for L.A. on Wednesday to compete for the second year in a row in the CrossFit Games Masters after qualifying 12th in the world in the CrossFit Open earlier this year.

Russ has been training the house down this year. He has worked tirelessly with diligence and discipline in addressing his athletic weaknesses and has seen some massive improvements.

At a time when his peers are ‘slowing down’ with age Russ continues to get better.
Never have I met an athlete who is so open to feedback and willing to adapt to advance himself both as a person and an athlete.
Russ you represent everything that I love about CrossFit, you are an inspiration to not only the Tasmanian CrossFit community but CrossFitters around the world.

The Tasmanian CrossFit community is behind you 100%. You’ve done the hard work now go out there and represent – you deserve this mate. 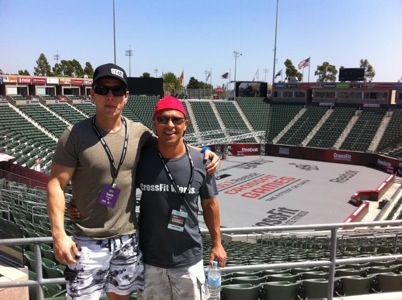 Russ and Drum at the 2011 CrossFit Games.