Courage, CF42s and a cake-maker: Tough Mudder 2012 By Sarah Caddick 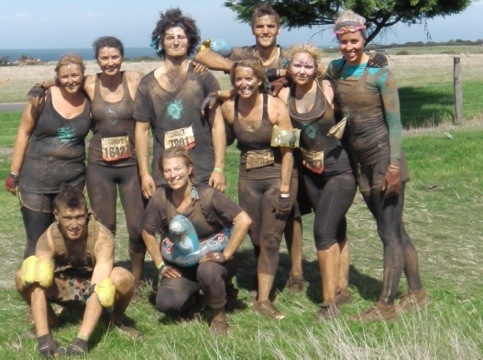 When young pastry chef Alissa Jeub from Melbourne went online one morning and signed up for a strange mud-themed adventure challenge set against the backdrop of a Phillip Island racetrack, little did she realise the stir she would cause. Having randomly selected a team from the challenge’s website, her chosen team – a group of Tasmanian Crossfitters from Team Crossfit 42South – wondered who this person was, why she would join their team … and more importantly, were her pastries paleo?

Thank you for an increadible journey. You are all more courageous than you know.
*Some elements of this article may have been slightly exaggerated to allow our team to show off a bit.
A Special Thanks: Team Captain Sarah R did a fantastic job – using her own time and resources – managing time, logistics, and a group of people (whose ages, capabilities and personalities spanned almost every demographic profile possible) to make sure it happened. Thank yous for planning an event on this scale should come from each person in their own way, and I know that this will happen many times over.
SC