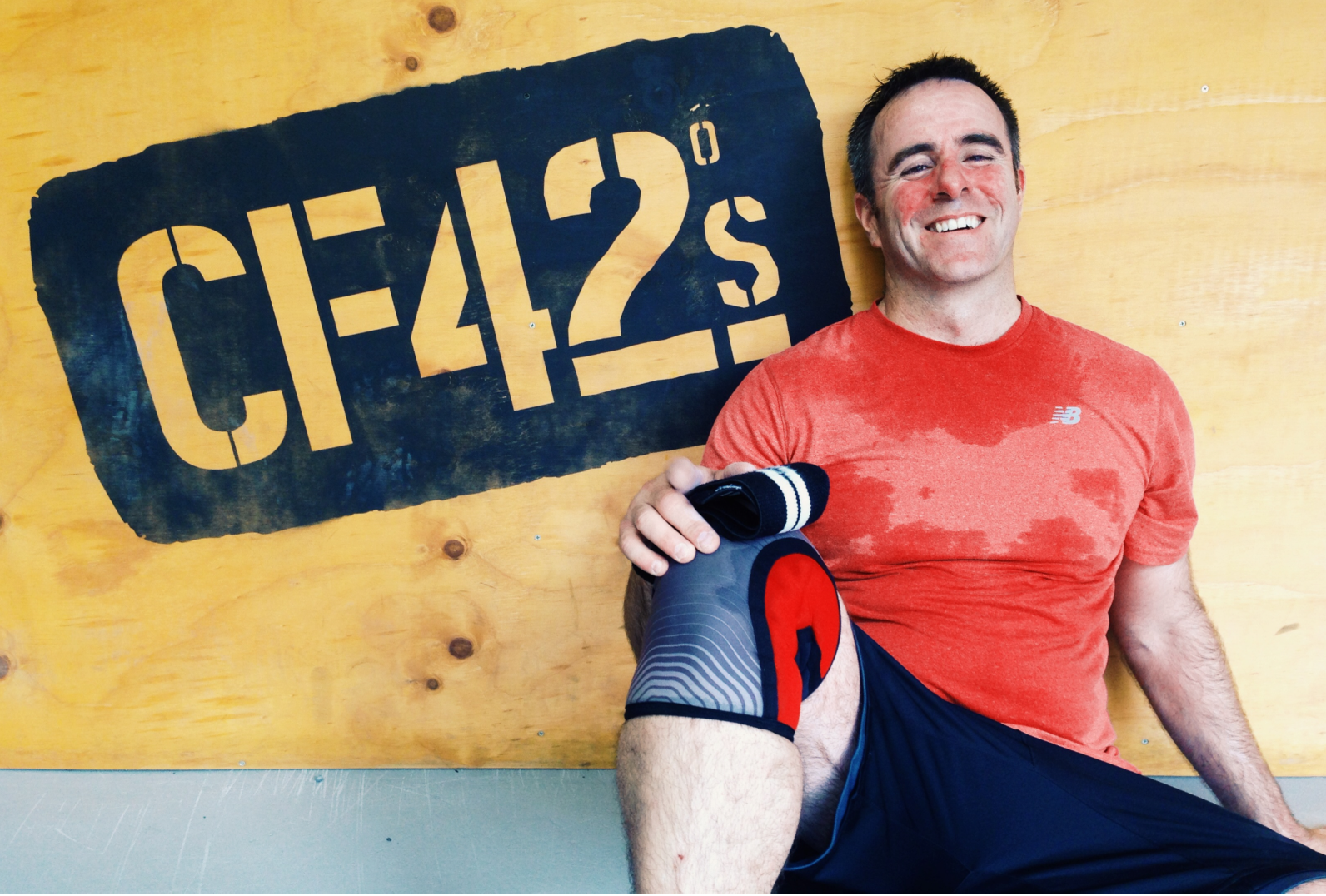 How were you introduced to CrossFit?
I was doing a bit of a small group boot camp. They were a good bunch of people but they mentioned the Crossfit Games one day. It sparked an interest but I didn’t do anything about it. I was also working with Esther at the time and she mentioned it as well. Two people I know talking about something must mean it’s worth looking into. I dropped in to
see Drummond and said I was ‘interested’ and then about a month later I got the courage to come in. I think he thought this bloke is a turkey and won’t be back, he was right about one thing! No on-ramp, just a slow build up with a heap of pain.

How long have you been doing CrossFit?
I started about February 2012 I think so it’s getting close to three years. Time flies when you are having fun!

What’s your favourite Movement?
It changes, I like the overhead stuff like snatch, it is power, strength and co-ordination along with a bit of courage to get under the bar. I’m still trying to get the courage to get under the bar. (Haven’t had much overhead lately gents, hint!) A new movement is always popping up that I like to tackle and the variety makes it all interesting.

What’s your least favourite Movement?
Anything I can’t do RXD. Push ups are right up there. Running is for lightweights. 30 inch box jumps are now terrifying for me, I haven’t done one since falling over and getting three less stitches than Bove got.

Best CrossFit advice you’ve been given?
Crossfit is all about getting constant advice. I certainly am not an expert and I like to get the feedback from the trainers and everyone in the box. Probably the best advice I got was to encourage others, that is what happened when I first started and it makes life easier when you are struggling.

A friend mentions that they are considering trying CrossFit – what
advice do you give them?
It’s the best training I’ve ever done. It’s a great environment, it’s positive and supportive and the people involved are easy going and friendly. Give it a go and see for yourself!

Tell us a little more about yourself outside of CrossFit?
I’m a Police officer and have been for about 26 years. It’s a great career and I recommend it to anyone. My wife and I have renovated 23 houses, she is obsessed with it and is very good at it. Luckily I don’t have to live in a work in progress now days, it’s interesting living without a bathroom and kitchen (I’m semi retired from renovating at the moment though).
We like to travel and I love getting overseas. I like to do adrenalin rides when the opportunity arises: check out the Shotover Canyon Swing in Queenstown NZ, that’s been my favourite so far.

When I walk into the gym, the first person I check on the whiteboard is?
Timmy, Bove, Sean and Rob S would probably think it is them, they all get a second look. I like it when I walk in and see that Drummond has had a crack with the rest of the punters. I love the get that kick in the guts when I realise how bad I really am at Crossfit.

You were the Movember Team Captain – how did the team do? How
much money did CF42s raise in the month?
The team did an awesome job. 16 of us got involved and the team raised $8677 which was a pretty handy effort for a little old CrossFit team. The donations from family friends and sponsors was amazing and I think the raffle went down pretty well. Bove and Dancey stepped up and did a great job for the month. I’d like to do it again next year but concentrate on a raffle more and perhaps another fun WOD night.

Why was it important to you to run a Movember campaign?
I noticed you gave me the opportunity to opt out of this one DJ… Thanks for the consideration but I’m happy to tell anyone that I’m 44 and have prostate cancer, and have had to have my prostate out. That the cancer got out of the prostate and I have had a round of Radiation Therapy to tackle the cancer cells that are floating around inside me.
The more I talk about it the more chance there is that someone might not be in the same boat as me one day. It pissed me off the other day when I read in the paper that they are trying to discourage Doctors from putting males through the stress of prostate cancer testing. I can tell you it is a lot more stressful having an advanced cancer than it is having
a simple blood test or a digital rectal exam (digital is finger for the un-initiated). Talk to your Doctors and get your blood tests and examinations. If they are hesitant insist on getting reasons for not having the tests. I talked to my Doctor and he told me a guy he operated on was 39 when he got prostate cancer that needed treating. If you don’t have a base line PSA test and DRE at 40 then you are taking a big risk in my experienced opinion. I’m not just talking about prostate cancer either, everyone should get the appropriate testing. So this is why I wanted to run a Movember campaign; it’s all about
promoting awareness and tackling men’s health. And it was a bit of fun.

Many of the girls said Drummond should have been disqualified for his
moustache effort – do you agree with this opinion?
They have it all wrong: how can you look and act like a 15 year old and expect to grow anything more that what he achieved?

You have a strong and very public rivalry with Rob Sheedy – first of all,
who is the better athlete, and second, where did does this rivalry come from?
Well, the result in the Crossfit Open in 2013 indicated that Rob S was the better athlete in the old farts category. That’s as close as he will get to a compliment. Due to a big hole in my guts I couldn’t compete this year so it is open for debate as far as I’m concerned. He can’t do a snatch to save himself so I like to mention that now and then, something about a
limp wrist or something like that. I hear a lot of people saying they aren’t competitive at CrossFit; bull… you compete against yourself, you compete against a clock, a weight, a number, a time and you compete against others doing CrossFit. That’s why they have the games! I like to compete and try and do better to catch a person who is better than me,
(not that Rob S is better than me). I think the rivalry started with the 2013 Open when he was then one in my age group I thought I could catch. As for the sledging, I think we both enjoy it, he is a good mate now and has been a great support for me when I was crook, as have many others at CF42.

What’s the best/worst thing you have been called by a trainer at CF42s?
Hmmmm… Worst – Razor’s “There there!” Best – Anything that makes me laugh, takes the piss, puts me back in my place and… also Razor’s “There there!” Finally, I’d just like to say thanks for the award on Friday. Unfortunately I was on call and couldn’t make it to the party. It is very humbling to receive any award, especially when I realise there are many masters athletes at CF42 that are fitter and stronger that I.
Cheers,
Terry.

Congratulations to Terry who received the award for Masters Athlete of the
Year for 2014.